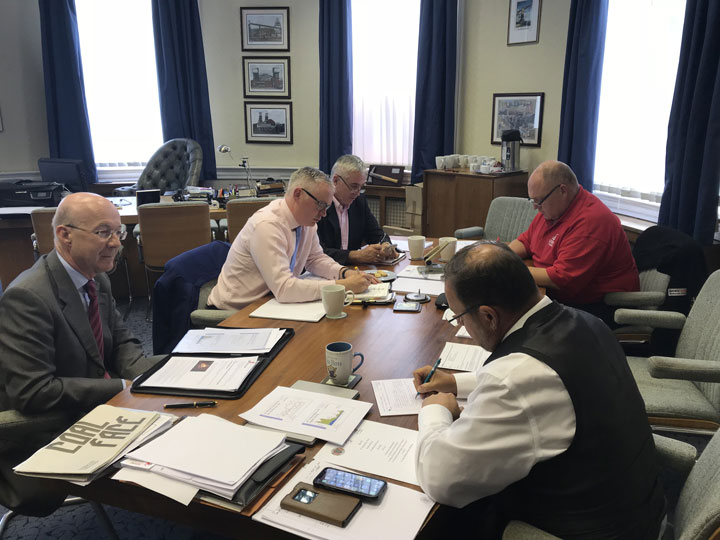 NUM / unite the UNION
The meeting was hosted by the NUM in Barnsley with Jerry Swain (National Officer Unite), Graham Walton (Unite Shop Steward and Coal Combine Secretary), Nigel Yaxley (Managing Director CoalImP) and Chris Kelsey (Communications Manager Banks Group).
The need to raise awareness of the serious situation regarding the coal industry was discussed at length. Coal seems to be overlooked with coal needed not just for electricity generation but also iron and steel manufacture, cement manufacture, coke manufacture, domestic heat generation, sugar production, food and beverage production, chemicals production, patent fuel manufacture including smokeless briquettes, carbon fibre products and many other uses.
Early Day Motions were discussed as a way of trying to raise awareness of the plight of coal and it was considered useful that MP’s be made aware that if the UK is to have any fuel security at all then the whole coal industry from production to distribution and use needs to be considered. In a written answer to Philip Davies MP, Con, Shipley, the Minister said on 12 June 2018 ‘I have regular discussions with Ministers in other governments on a range of topics, including the production and use of coal, promoting the UK’s Industrial Strategy and maximising opportunities for UK firms after Brexit.’ The meeting asked what had been discussed in relation to the UK coal industry and what could we expect ‘after Brexit’.

Since the meeting Ronnie Campbell MP, Labour Blyth Valley has tabled an EDM which is common sense and should be supported by all MP’s. Ask your MP to support this motion.

Early day motion 1596
NEED FOR COAL TO MAKE STEEL AND CEMENT IN THE UK
• Session: 2017-19
• Date tabled: 10.09.2018
• Primary sponsor: Campbell, Ronnie
• Sponsors:
That this House notes that coal is an integral part of the UK manufacturing sector used in the chemical process to make steel and cement; further notes that over the last decade around nine million tonnes per annum of coal has been needed in the UK for non-electricity generation purposes; notes that if coal is not produced in the UK it will be imported from countries including Russia, the US, Colombia and Australia which produce more carbon dioxide through its transportation than coal produced in the UK; and therefore calls on the Government to recognise the production of high quality coal in the UK supports jobs, skills, taxes and investment in the UK and cuts down the carbon dioxide emitted in transporting coal from producers thousands of miles away.